Every day is a miracle (Jaspyr's update)

Every day is a miracle
by Glenda Gibbs


Today is a celebration … as every day since Jaspyr’s birth. We’re past the first month mile-marker. All of the professionals, i.e., doctors, nurses and specialists tell us even though he was born six weeks premature and diagnosed a UIGR baby he is progressing remarkably well.

Our lives have changed beyond anything I could have imagined, so much I could write and write – I’ll spare you and give you the shortened version.
Miracles were happening, it’s as though angels gathered and decided to intervene… he was moved to a NICU the Wednesday evening following his Monday birth. The best of the best professionals came to his aid.

Kadlec Hospital’s NICU staff – the baby’s advocates – are very protective. From the moment of entry to visit him at the NICU hands have to be scrubbed three minutes (yes they provide the clock, soap and brush) and rubber gloves wore for those who have acyclic nails – and of course hospital gowns. The policies and procedures were strictly in place and followed by all. They had Jaspyr’s health as their priority. We referred to the nurses as ‘mama bear’ protecting her cubs.

We were in NICU for 18 days. We learned typically a mother shares her antibodies the last three weeks of her pregnancy with her baby and the baby is born with a ‘built-in’ immune system; because Jaspyr was 6 weeks early, he was born without an immune system. Now, his primary resource attaining antibodies are through his mother’s milk. Thank goodness he loves it!

The doctors tell us even though chronologically he’s a month of age; developmentally the count begins February 11 (his due date).

We learned having kangaroo time (a technique introduced and practiced at the NICU) assists Jaspyr with his development. Kangaroo time is skin-to-skin contact, the benefits are phenomenal – baby’s brain develops, also assists with heart rate, breathing, temperature control, steady weight gain and being alert. He takes turns with both of his parents … and he thrives.

Jaspyr was discharged from Kadlec’s NICU Friday January 21 to go home with his parents weighing 3 pounds and 12 ounces and 17” long. (He was 3 pounds 11 ounces and 14” at birth.)

Since leaving the NICU … I’ve become the ‘mama bear’ … I am very protective of this little guy’s health. With face masks to those who have been ill (recent past tense) and or around others who have; flu shots are a must and for those who smoke … an absolute no unless they’re willing to go the extra mile. Surprisingly, there are those who minimize the inconvenience of putting on a face mask, sterilizing their hands or changing into smoke free clothes (and wearing a mask) it’s just too much.

… when I was a child my mother gave premature birth to twins (about the same weight/size as Jaspyr and each fitting in a shoebox); we lost a brother who was ten weeks. The cause of death was listed as SIDs. Now, with a wealth of research, I entertain the twins were IUGR babies as well as my younger brother. While we didn’t know or have the resources then, we do now… hence me being ‘mama bear’.


Prior to Jaspyr’s birth Dellyne smoked…. Since Jasypr’s birth she has made profound decisions – using the patch to quit smoking (yes!!) and using an anti-depressant to avoid post-partum depression. She’s also on leave from her job – no day care for Jaspyr. Things are looking up.

Every day is a miracle.

Yesterday we learned Jaspyr weighs 4 pounds and seven ounces. He’s gaining about an ounce per day! Maybe he’ll be five pounds on his “official” birthday.

Once in a while Jaspyr is impatient, fussing and kicking his little legs, wanting food. He’s been known to sleep several hours through the night and is getting used to the bassinet, though he prefers being held. He recognizes voices … and he knows when his grams (me) holds him. He might be fussy and as I sing or read he calms quickly. Here lately we’ve noticed a slight curve denoting a smile …

Jaspyr is taking to sucking his thumb; his arms have outgrown the length of his jammies – he loves to cuddle, thus a nickname of snuggle bug … his siblings love him … wanting turns to hold him, and I must admit his oldest brother Bryce (who is 15), doesn’t mind changing a poopy diaper.

The outpouring of prayers, blessings and thoughts have been the wind beneath his wings, he soars because of all the love you’ve shared.

A heartfelt thank you!

Love to you,
Glenda 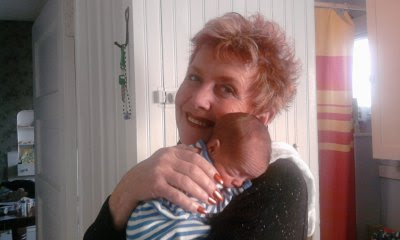 Here we are, Grams and Jaspyr 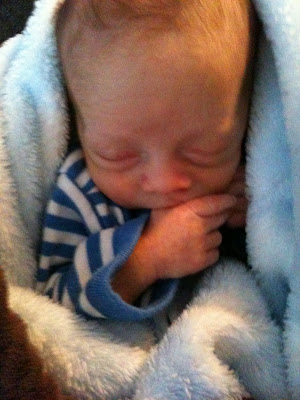 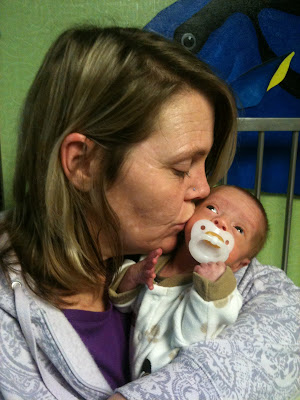 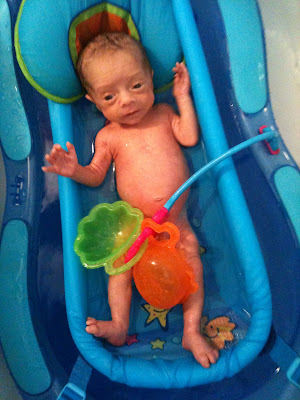 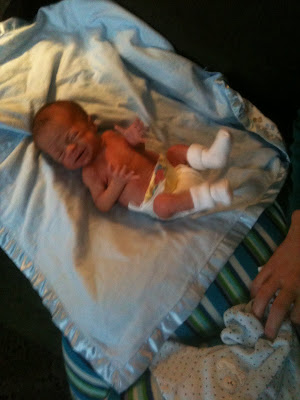 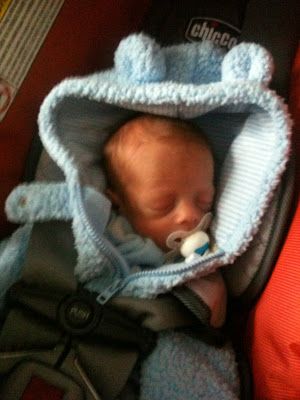 these are NB jammies ... a while before they fit 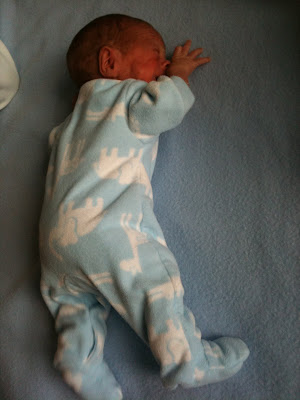 getting 'tummy time' -- learning to lift himself, strengthening muscules 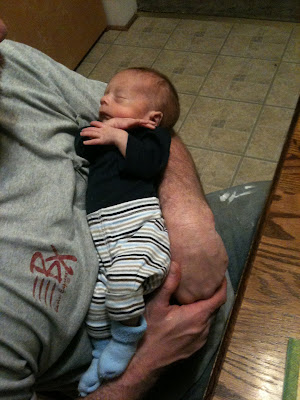 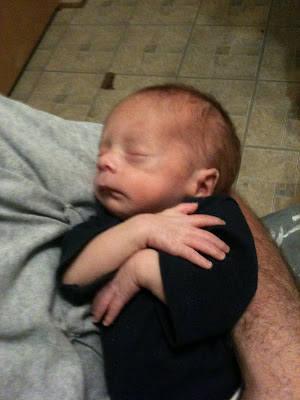