A two year old provides us metaphors to a successful life …

Yesterday I shared my time with Benson, who is two. We were out doors where he has a big backyard to play in, a couple of Cocker Spaniels to play with – though he has little time for them as he’s more interested in duplicating his father’s actions.

Benson grabbed my hand and led me to the ‘big boys’ shop where the ‘big’ riding lawnmowers and motorcycles are stored. We went inside and quicker than you can blink an eye, he was over, around and through the maze and all but on a mower. I found myself moving quicker than I have in a year or two, and while swooping him up in my arms he had the realization his adventure was brought to a halt. 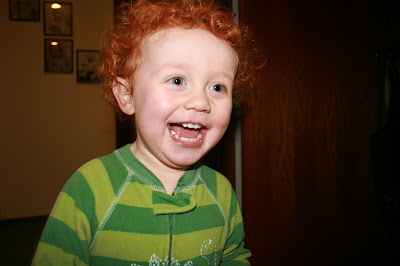 Let me rewind for a moment, since this baby has been barely old enough to be propped in front of his father on the riding lawnmower, Benson has been glued, watching every move. His father taught Benson how to “drive” and “shift” – Who would have known this little masterminded curly-red-head has a photographic memory?

I’m guessing he was a little older than a year (not much though) we were out in the backyard, his dad had left the riding lawnmower outdoors with the key in the ignition.

Imagining a little guy at that age knowing how to climb up and attempt to turn the key (the only thing that prevented this from occurring was that he didn’t have the strength). Benson would move the wheel back and forth; he attempted to move the lever on the handle bar – he was ready to make that thing go. Thinking to myself, oh my gosh, changes are in the works. His daddy decided it was time to move the lawnmower into the shop – with a closed door.

Christmas brought him a John Deer riding lawn mower just like his father’s.

Returning to yesterday … after Benson realized that I was interrupting his grand scheme and fussing and flinging about in my arms for a moment, I assured him we’d do something else. We did. He took off headed for his riding lawn mower – I quickly realized that it was operational. It too had a gas pedal (that works), gears including reverse (that work) and the steering wheel that moves when he turns it. He jumped on that thing just like he’s watched his dad a zillion times. Driving it around, he’d get off pick up sticks and add them to the attached bed … and get right back on and continue.

I was amused to watch him while he was driving on an uphill slant, occasionally the tires would lose traction preventing him from going anywhere. He’d jump off of it, saying something about it not getting enough gas (remember he’s two), fiddle with the gas lid saying it would get more gas, jump back onto the seat and put it into gear, foot on the pedal with determination and belief that mower would move forward – and it did, with a helping hand unbeknown to him.

I love being Benson's grandma.

A great experience, and with my recapping to my daughter (Benson’s mom) several metaphors appeared…

May I suggest this little guy watched, learned, listened and he took action; without thinking, he believed …

Where might you apply this little guy’s wisdom in your life?

Wishing you a happy day!
-Glenda

© Copyrighted 1998 – 2009 by Glenda Gibbs. Feel free to share... The content may be forwarded in full, with copyright/contact/creation information intact.

Author's Bio
Glenda is passionate about leaving the world a better place, people feeling better about themselves and the power of positive thinking. She loves to share her wisdom and experiences as an integrative coach/counselor, facilitator and writer.